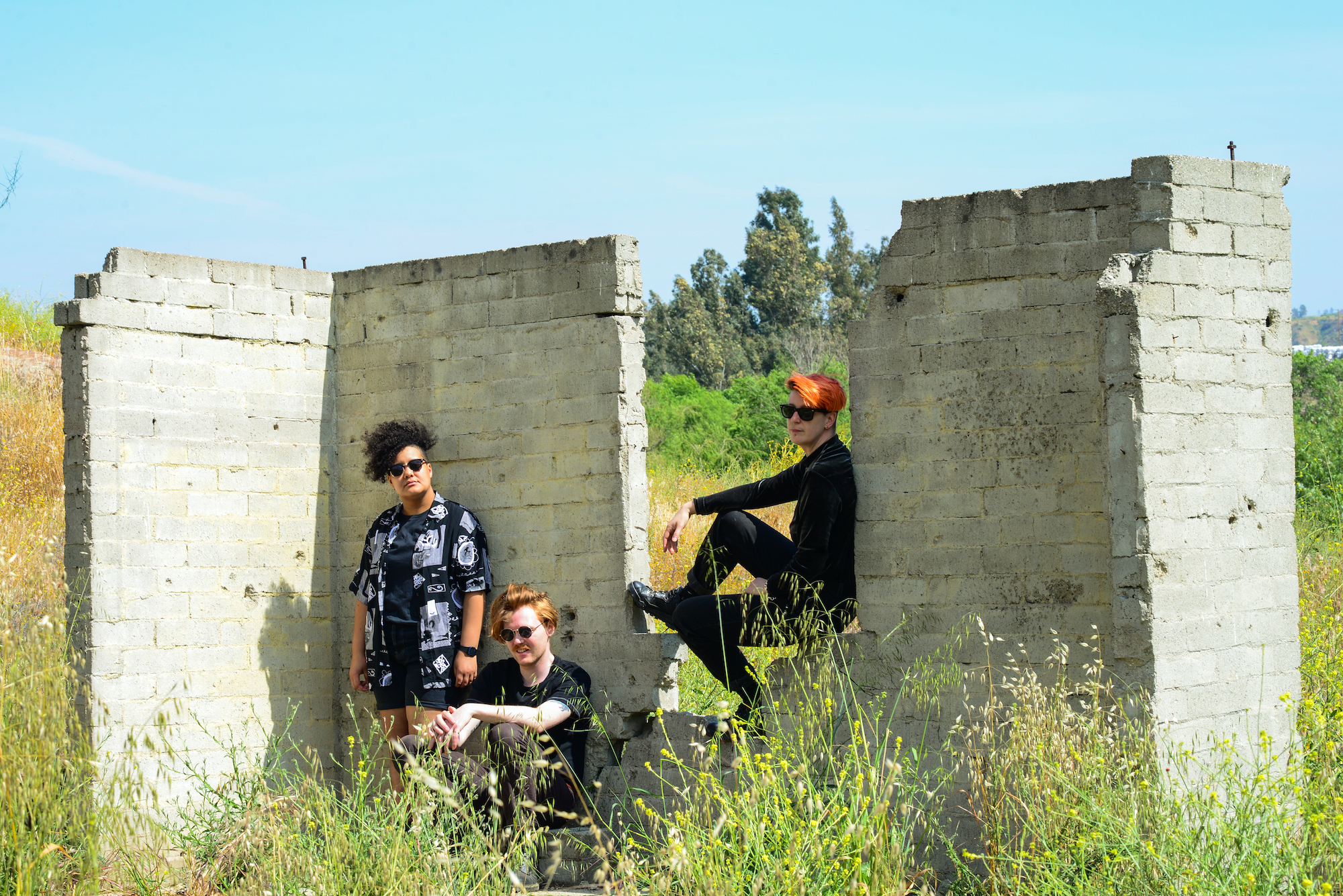 The DIY ‘supergroup’ formed in 2012, respected players on a young, queer, East London scene that counted basement venue Power Lunches (RIP) as its hub. Their sound – kinetic, minimalist dance-punk inspired by the likes of ESG, Gang of Four, Slits and Au Pairs – has won them glowing press from all quarters (NME, Pitchfork, NPR), impressive co-signs (Sleater-Kinney’s Corin Tucker is a fan) and a loyal, cross-continent following accrued over three, acclaimed albums: self-released debut Consumer Complaints [2013], a short-run, DIY-distributed release that sold out in a matter of months and was subsequently reissued by FatCat; Why Choose [2015, FatCat], which saw the band touring the States for the first time; and The Official Body [2018, FatCat] – produced by indie pop legend Edwyn Collins – which bagged the threesome a main stage slot at San Francisco Pride 2018 and a coveted publishing deal with Sub Pop.

It was there on the US West coast – in a Seattle basement, to be exact – that the storming lead single for All Or Nothing was written. ‘Initiative’, like the album as a whole, thrums with purpose, marking a confident new phase for the band. They may be miles apart, but distance has only sharpened their focus. The members of Shopping still write together, face-to-face, taking a collaborative approach to lyrics and vocals. And after seven years as a band, they’ve finessed their creative process. “I think we have this down to a fine art now,” jokes Easter. “We used to spend longer working on songs that we eventually ended up hating. Now we’re more cutthroat about it; if it’s not working, we’re like ‘next!’” Aggs concurs. “I think songwriting is starting to feel less like magic and more like this tangible process that just works as long as we put all of our energy into it.”

All Or Nothing was written across an intense 10-day period back in February, with sessions spent in London and Glasgow. The songs that emerged are some of Shopping’s boldest yet: confident, elastic, streamlined grooves that crackle with energy and intention. Uniting these ten new songs is an expression of tenacity: commitment, leaps of faith and tests of courage. “A lot has happened in our personal lives since we last recorded,” explains Aggs. “We knew this album was going to reflect that exciting and scary feeling that comes with change, heartbreak and personal evolution.”

When it came to recording, Shopping teamed up with Davey Warsop, a Birmingham-born US-based producer who’d approached the trio at a gig in L.A.

In the past, the band have been “ extremely faithful to the demo versions of each song, keeping things very stripped down,” admits Aggs. All Or Nothing sees them shifting their priorities. “In the spirit of the album title, we figured we would take a leap into the kind of pop production we’ve always dreamed about,” says Easter.

Talking Heads, YYYs, Bronski Beat and LCD Soundsystem are among the artists to feature on the production inspo playlist the band created for Warsop, who oversaw recording in April, and Shamir producer Nick Sylvester, who mixed the record, in Los Angeles. After that, NYC based engineer Sarah Register handled mastering.

Along with cleaner, new production values, All Or Nothing sees Shopping experiment further with the sonic additions that coloured The Official Body. Jubilantly ‘80s synths and electronic percussion add new textures to their signature minimalist dynamic, flourishes that show up on the accelerating zooms of ‘Follow Me’ and the frenetic, propulsive robotics of ‘For Your Pleasure’. “We introduced both of these sounds on the last album and just decided to be more liberal with them this time,” explains Easter. Aggs – feted for her dexterous, Highlife-inspired fret work – went so far as to down guitars for a number of tracks (‘For Your Pleasure’, ‘Follow Me’, ‘Lies’). “It’s been so fun developing quite a specific guitar style within Shopping, but I think we were all getting a little sick of it to be honest! It felt very stale to just have every song be the same formula so I’m glad we did away with the guitar for a few songs.”

Four albums in, Shopping are as committed and focused as ever, regardless of any distance. As critics have noted, the trio’s vision – groove-centered; deeply queer; political by default – place them in a radical lineage of dance, a continuum connecting disco and post-punk to Chicago house and EDM. That spirit of liberation through rhythm is very much present on All Or Nothing, says Aggs. “We found ourselves singing about being true to yourself, in an often binary and belligerent digital age, and reclaiming agency when it feels like our personal freedom and privacy is constantly eroding.” In an era dominated by spin and surveillance, All Or Nothing invites us to remember what really moves us, in dance and in life.

Automatic is Izzy Glaudini (synths, vocals), Lola Dompé (drums, vocals) and Halle Saxon (bass, vocals). The band first met while immersed in L.A.’s DIY music scene and started jamming together in 2017. Over the past year they have become a mainstay on the L.A. club circuit. In June 2019 Automatic announced their signing to Stones Throw.

Automatic’s debut album Signal is out now. They’re touring Europe in October, and North America with Black Marble in November.

Faux Real is the deranged child of Franco-American brothers Elliott and Virgile Arndt.

In the summer of 2018, they invoked the union of their inner-gene genies and gave birth to faux realism.

The brothers started playing their first shows as a duo with nothing but a couple of microphones, a flute, some handmade costumes, and a weird/incestuous/compelling 30-minute long choreography. With no music online or a single confirmed show on the horizon, they took off on a month-long U.S. tour in March 2019, with high hopes and low expectations.

Faux Real are also becoming known for their charismatic visual identity despite a willingly limited online presence, and have already been shot by some of today’s preeminent music and fashion photographers.

The project sparked up the interest of Jay Watson (Tame Impala, Pond, Gum) who came to work on Faux Real’s first EP, due the fall of 2019. Faux Real’s debut single “Second Sweat” rips through the many joys of social anxiety and panic attacks at a cruising speed of 162 BPM while surfing on motor synth loops, chichi guitars, and gritty slap bass.