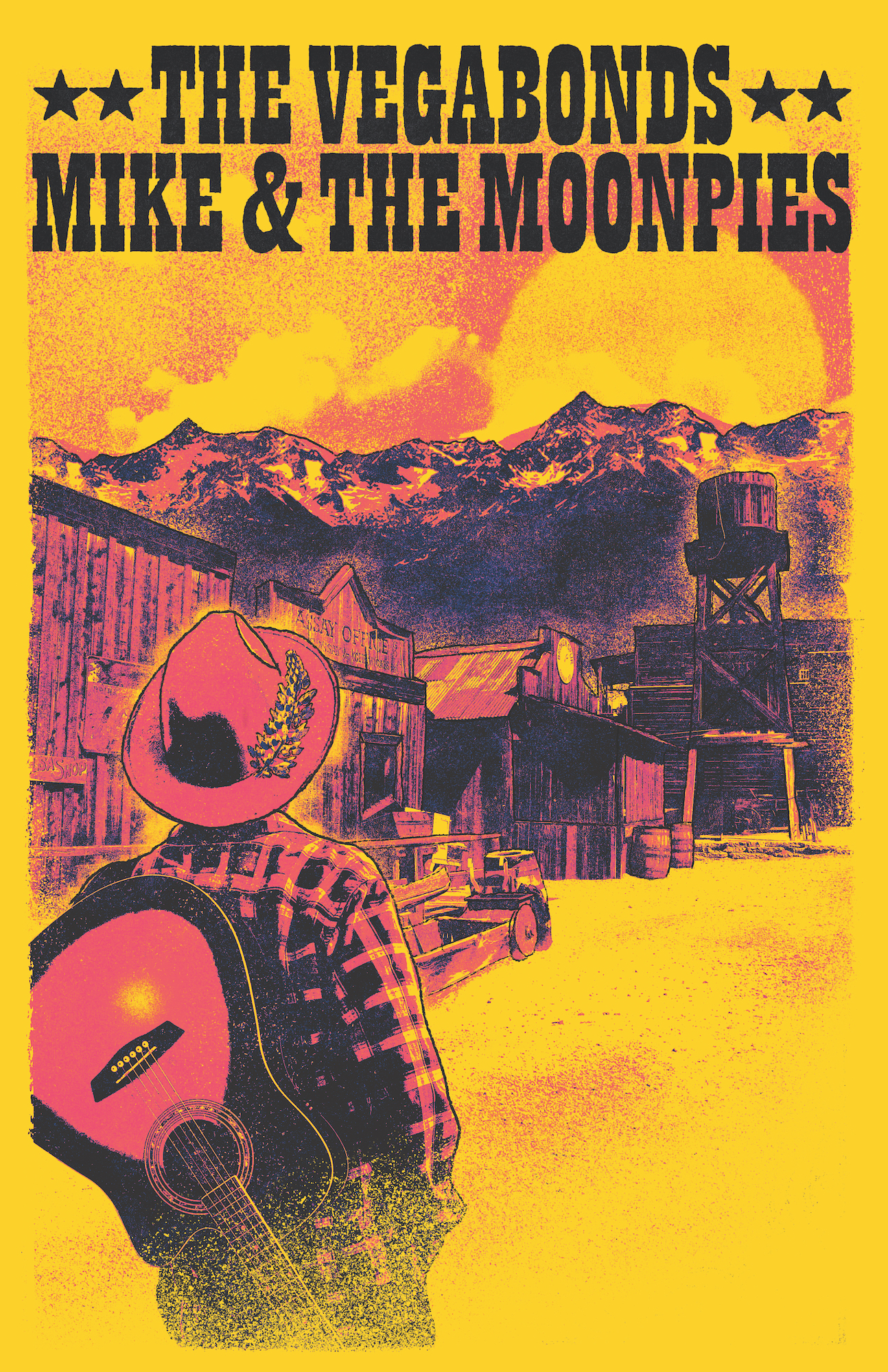 Postponed
Tuesday, June 16
Show | 8:30pm // Doors | 7:30pm
$9 to $12
The originally scheduled June 16th show with The Vegabonds has been postponed to a new date to be determined. The show is still on! Your previously purchased tickets will be honored on the new date! If you cannot make the new date, we are happy to offer a number of alternatives. We just ask that you please wait until we are able to announce that new date, before you inquire about a refunds / exchanges etc. We'll e-mail all of the details to all ticket holders as soon as the artist makes them available. For the quickest response, e-mail us direct at info@bootandsaddlephilly.com with any questions or concerns.
RSVP on Facebook

The Alabama-born, Tennessee-bred Southern rock band, The Vegabonds kick off 2019 with the release of their fifth album (and first for Blue Élan Records) entitled “V.” The band will support “V” with a full year of non-stop touring throughout North America and Europe.

V crosses boundaries of multiple music genres. These vibrant songs travel from sad to soulful; gritty to glorious. It’s a timeless American album in the sense it deals with eerie matters working people endure and captures their salvation in a song. Songs like “Partyin’ with Strangers”, the new single “I Ain’t Having It” and “When The Smoke Clears Up” proves the group’s ability to move people with a story, beat and melody.

Vocalist Daniel Allen recently revealed, “I hope fans hear stories in the album. We are in a very unique time in history, and this album touches on the struggle of every day folks doing their best to navigate love, work, beliefs and the ever-changing politics that flood our lives daily.”

The Vegabonds got their start in Alabama in 2009 by playing the college circuit across the Southeastern United States. Their popularity quickly burgeoned to the point where they found their fans singing along word-for-word to their first hits like “Georgia Fire” and “Shaky Hands.” From Ole Miss to South Carolina, students were buzzing about The Vegabonds’ authentic sound and their seemingly effortless ability to bring the house down. Through pure word of mouth, the group’s fan base rapidly grew, and the guys learned they had something distinctive with their eclectic mix of Southern Rock, Country, and earnest songwriting. Their DIY ethic delivered three full-length albums and an EP before partnering with Blue Élan Records for their current release.

With a sound reminiscent of Tom Petty & The Heartbreakers mixed with the grit and twang of the Allman Brothers Band, The Vegabonds deliver a sensational performance, with powerhouse guitar riffs and impactful songwriting, night after night. Their hard work and unbridled talents have not gone unnoticed; the group has opened for such notable acts as Lynyrd Skynyrd and the late Gregg Allman and delivered rousing performances at festivals like Peach Festival, Sweetwater 420, Magnolia Fest, Sunfest and Taste of Randolph. In addition to countless dates throughout the Southeast, the band has toured Europe three times, played multiple dates in Canada and have visited every corner of the US.

A group of five musicians with myriad influences between them, The Vegabonds are fronted by lead vocalist and songwriter Daniel Allen, with Richard Forehand (lead guitar/vocals), Paul Bruens (bass), Beau Cooper (keys/vocals), and Bryan Harris (drums) rounding out the quintet.

Recorded at Abbey Road Studios with help from the London Symphony Orchestra,Cheap Silver and Solid Country Gold is Mike and the Moonpies’ most adventurous record to date — an album that diversifies the band’s honky-tonk roots by adding lush strings, cinematic arrangements, and collaborative songwriting to the mix. Inspired in part by the classic “countrypolitan” music of the 1960s and early ’70s, these songs find frontman Mike Harmeierchanneling the smooth delivery of crooners like Glen Campbell and Frank Sinatra, backed by a band of road warriors who all played a major role in the songs’ construction. The result is a modern record steeped in everything that made the old stuff so compelling: sharp storytelling; honest, dynamic performances; and a willingness to step far outside the box.

Once celebrated as Austin’s premiere dancehall band — with popular residencies at local institutions like The Hole In the Wall, Broken Spoke and the White Horse to match — the Moonpies have spent years expanding their reach far beyond the Lone Star State. Geographically, they’ll always be a Texas band. Musically, they’ve grown into much more than that, having traded the two-steppin’ twang of their earlier years for a diverse sound that’s both fresh and familiar. That sound has earned the group an international following, and it was during a European tour that the bulk of Cheap Silver and Solid Country Gold was created — in the same world-renowned, London-area recording studio where the Beatles recorded Sgt. Pepper’s Lonely Hearts Club Bandand Pink Floyd tracked Dark Side of the Moon, no less.

“Every time we’ve taken a step forward, it’s a result of us refusing to become stagnant,” says Harmeier, who’s joined by his longtime band — pedal steel player Zach Moulton, guitarist Catlin Rutherford, bassistOmar Oyoque, keyboardist John Carbone, drummer Kyle Ponder, and producer/collaborator Adam Odor — on Cheap Silver and Solid Country Gold’s eight tracks. “We left our dancehall residencies years ago because we wanted to expand our touring beyond Texas. We updated our approach withMockingbird, then went back to a more traditional sound — in a 1970s, Johnny Paycheck-inspired way — with [2018’s break-out album] Steak Night at the Prairie Rose. 10 years into our career, we’re still finding our voice… and we’re realizing that maybe it’s not onevoice, but a collection of voices.”

A collection of voices, indeed. The album’s lead single, “You Look Good in Neon,” is a nostalgic toe-tapper that evokes Ronnie Milsap’s golden years, while “Fast as Lightning” is a raucous road song that’s every bit as electrifying as its title. On the nostalgic “Cheap Silver,” Harmeiertakes stock of his band’s progress as an eight-piece string section swoons in the background, while on “Danger” — a hard-charging epic that’s fit for a Hollywood western, with a cameo by Shooter Jennings to boot — he sings directly to his son. Also making guest appearances on the album are modern-day outlaw Nikki Lane, who contributes harmony vocals to “Miss Fortune,” and fellow Texas native Season Ammons, who shows up during the album’s elegant cover of Gary P. Nunn’s “London Homesick Blues.”

Although largely recorded in London, Cheap Silver and Solid Country Gold still owes its inception to Texas, where the bandmates spent a week co-writing and arranging songs at renowned yellow DOG Studios in Wimberley, TX. “Everyone had a hand in the creation process, from start to finish,” says Harmeier, who shares co-writing credits with multiple Moonpies throughout the album. “I usually come to the table with all the songs already written, but this album is entirely different. We worked on everything together. It was the most collaborative thing we’ve ever done. It was truly the work of a band.”

It’s been more than a decade since Mike and the Moonpies launched their career, initially paying their dues as a versatile cover band with a catalog of 300 songs. Cheap Silver and Solid Country Gold nods to those woodshedding days — not only in the album’s title track, where Harmeierraises a drink and sings, “Here’s to another night of paying our dues,” but also in the album’s handful of cover songs. The boys resurrect the twangy spirit of their dancehall days with “If You Want A Fool Around,” written by Billy Troy and BennieBoling, and also put their own stamp on Aaron Sinclair’s “Young in Love.” Those covers serve as a tip-of-the-hat to the band’s roots, while also demonstrating that the Moonpies’ own songs pack just as much punch as the songs of their heroes. Harmeier and company haven’t forgotten about their bar-band beginnings, but these days, they’re more interested in creating their own gold.

Cheap Silver and Solid Country Gold rewrites the definition of Mike and the Moonpies’ music, turning vintage influences into a contemporary that’s dark, reflective, and refined.