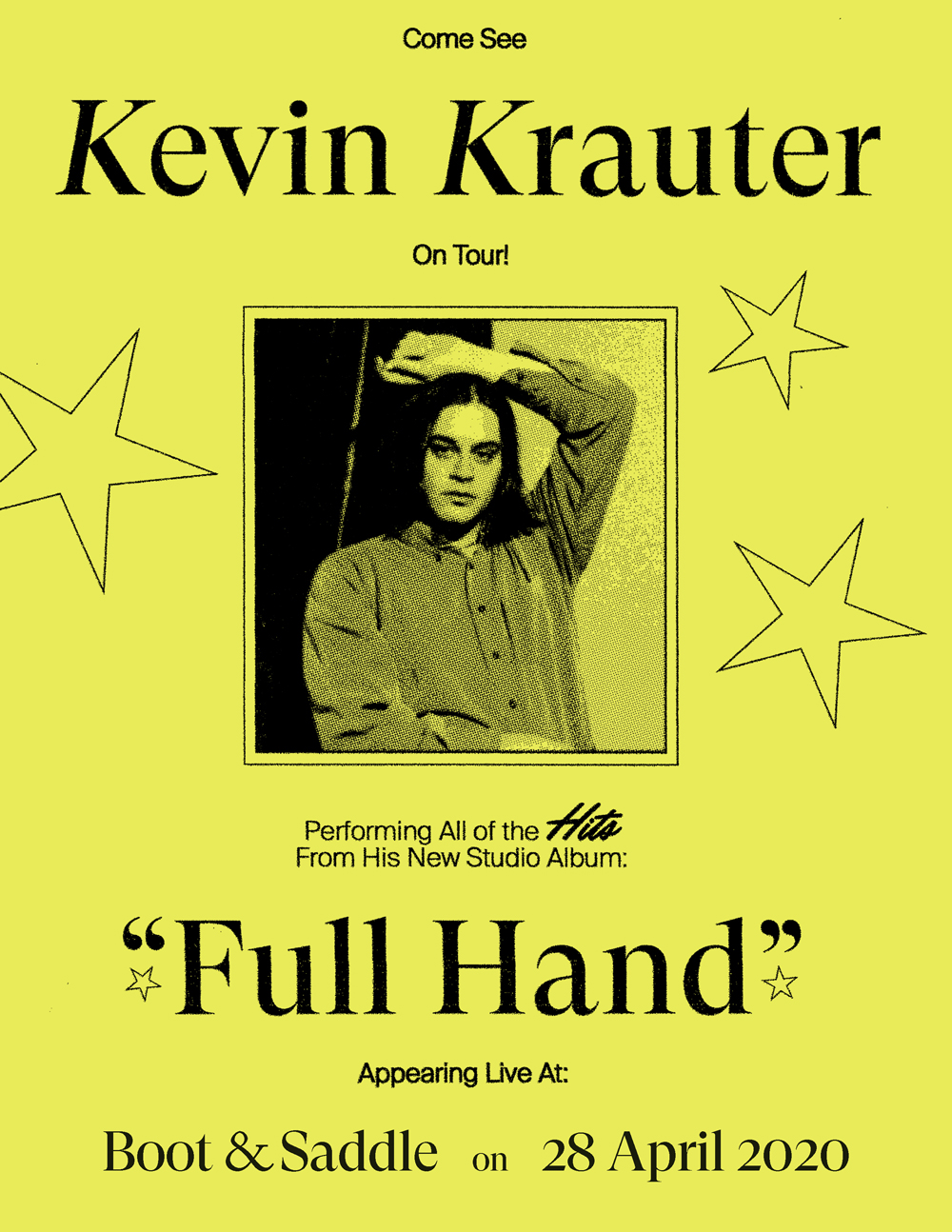 Buy Tickets
Monday, July 20
Show | 8:30pm // Doors | 7:30pm
$10
Hello! We hope everyone is staying safe out there. Wanted to let you know that the originally scheduled April 28th show with Kevin Krauter has been moved to July 20th. All existing tickets for the new date will be honored! If you cannot make the new date, we are happy to refund you. Refund requests must be made by April 2nd. Thank you for your patience and understanding! xo, Boot & Saddle
RSVP on Facebook

In music, there’s often a tendency to focus on personal pain. It’s a useful shorthand for understanding how an artist got to where they are now, but sometimes that heaviness doesn’t leave enough room for nuance and change. In his solo work, the Indiana musician Kevin Krauter doesn’t flinch when staring down his past, but he doesn’t get too obsessed with the dark stuff either.

In 2018, Krauter released Toss Up, a quiet album that was built on intricate guitar riffs that looped back on themselves to create a feeling of sunlit calm. Krauter’s sophomore follow up, Full Hand, dives further into the world he’s created — one where songs are evocative of late afternoon light, or dust settling on a creaky floorboard, but with lyrics that probe Krauter’s personal life, grappling with sexuality and religion, while exploring what it means to grow up, grow more critical, and, in turn, more self-confident.

Across 12 tracks, Krauter tackles these emotional states and ideas through elliptical songwriting that is at once poetic and truthful. “A lot of the lyrics touch on how I was raised religiously, touch on me understanding my sexuality more and more in recent years,” Krauter says, “just growing up and becoming more confident in myself…that process of looking inward and taking stock of myself.” It’s not especially uncommon for artists to probe deep into their own psyche to uncover what makes them tic, but Krauter’s light touch feels like something all his own. On Full Hand’s first single, “Pretty Boy,” he sings, “Look ahead, say I see me now / Smiling at what used to stress me out / Cause it won’t be too long, but I’ll take my time with it / It won’t be too long till I come back home.” There’s a palpable sense of joy in Krauter’s acceptance of dire, stressful moments, and a liberation that comes from hearing him realize that the present will eventually be the past, and he’ll be able to look back and find peace.

This sense of acceptance is the backbone of Full Hand, both musically and lyrically. Krauter took stock of the different phases of his life — what he was listening to, how he felt when he was a teenager — and welcomed all of it into his music. This meant that nothing was off-limits. All influences were fair game — from early-’00s emo to late ’90s radio rock — and his entire history, instead of becoming something to be ignored or pushed aside, became part of the patchwork of his music. “It’s nice to recognize that the instinct is there in me and all I have to do is say yes or no.”

Around the release of Toss Up, Krauter shed light on his dominant artistic impulse toward overwhelmingly nice sounds that weave throughout lyrical meditations on personal growth. His vocal lilt on “Opportunity” is so warm, so effortlessly pretty, that you’ll almost miss moments of harsh truth like “Wake up to a morning so listless / come to, sun is looming in.” By the end of the song, Krauter is alone, left behind, looking at his life and wondering what he’s supposed to do next. “It’s an easy fallback to be self-deprecating or defeatist in whatever I was I writing,” he says. “It was a challenge to myself to see how I could flip it the other way but also be real about it. I don’t want to make some sugary, feelgood, all payoff thing because that’s not what my life is like.”

And on Full Hand, he gets there. It’s an album that is a holistic look at a human life in progress—personal flaws mean everything until they suddenly don’t. Situations are terrible until a new perspective is uncovered, and then they’re not. He’s not so much looking for resolution as he is accepting the journey. On “Surprise,” that journey is distilled into nearly four minutes of perfect pop that manages to encompass the nuances of Krauter’s entire life. “It explores anxieties I deal with and worries that I have. Areas in which I feel inadequate or unfulfilled. It’s always a surprise to come to a realization that it’s not as good as I thought it was,” he says of the song. “And then having to jump back into…it doesn’t matter. Life goes on.”

Why Bonnie started life as the bedroom recording project of Blair Howerton. The group has grown into a quartet comprised of Kendall Powell, Sam Houdek, and Chance Williams. They’ve released their first two EPs, In Water and Nightgown, via Sports Day Records. Why Bonnie is currently gearing up for a much anticipated release in 2020, so keep your eyes and ears peeled!

“Musically, it’s a powerful mix of soaring shoegaze guitars and heartbreaking bedroom-pop; atop a steady, driving drum beat, guitars soar skywards as Blair’s stunning, natural vocals…What really shines about this [release] is just how honest it feels; the grief, the loss, the pain, they’re written over every single note, and no matter how many times we’ve listened to it this week, we still can’t stop the goosebumps forming every single time: it’s a very, very special record.” -Alex Dingley – For the Rabbits