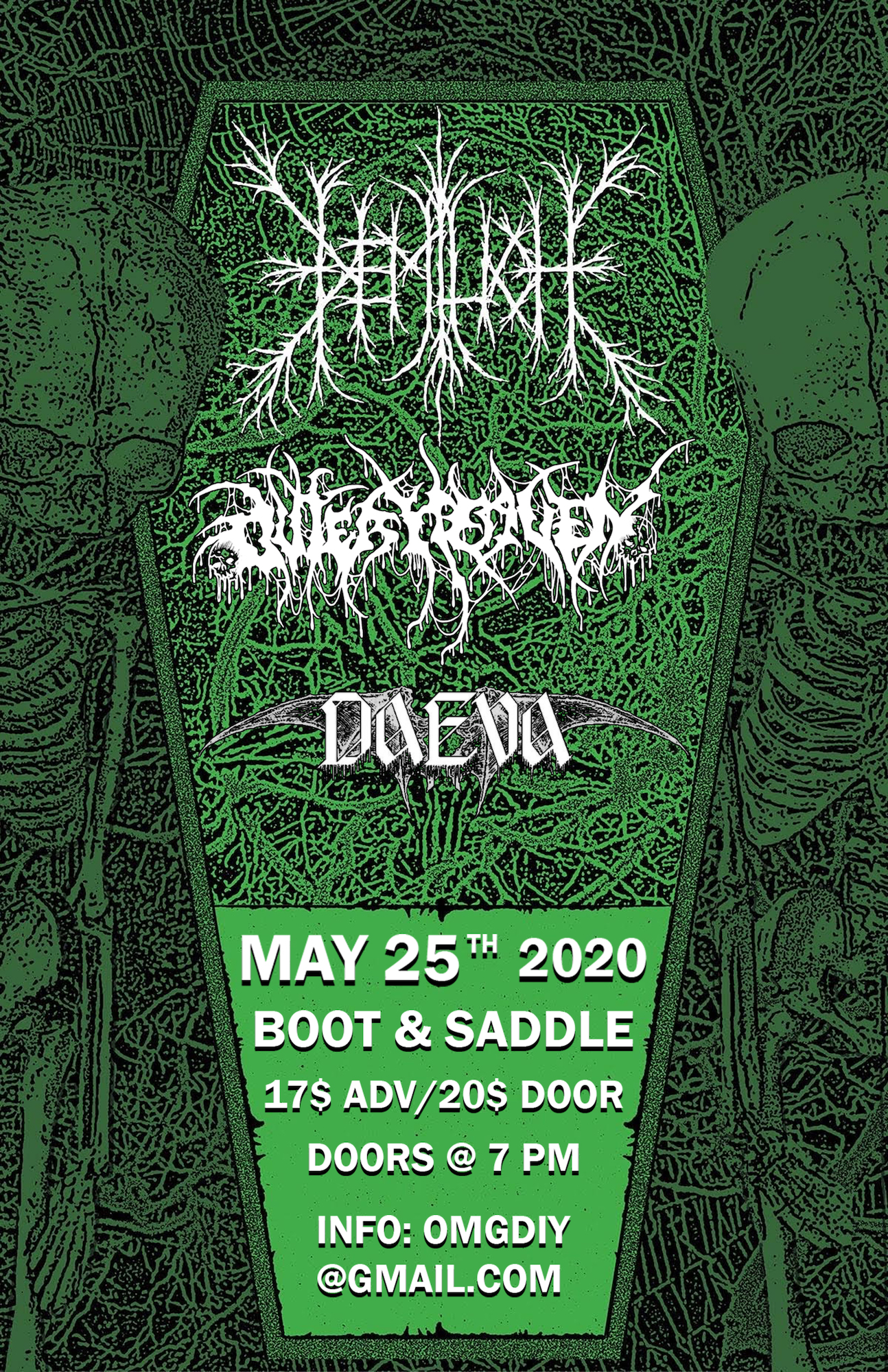 Canceled
Monday, May 25
Show | 8pm // Doors | 7pm
The May 25th Demilich show at Boot & Saddle has been canceled. Refunds are available at point of purchase.
RSVP on Facebook

Finland’s Demilich formed in the early ’90s and consisted of vocalist/guitarist Antti Boman, guitarist Aki Hytonen, bassist Ville Koistenen, and drummer Mikko Virnes. On their lone album, 1993’s Nespithe, the quartet came up with a highly unconventional sound marrying intricate death metal riffs with impossibly low-end, gurgled vocals — then topped it off with inscrutably overblown song titles such as “Erecshyrinol,” “And You’ll Remain…(In Pieces of Nothingness)” and “The Sixteenth Six-Tooth Son of Fourteen Four Regional Dimensions”!!! Hardly ideal for the pop charts, these were at the very least unquestionably original. ~ Eduardo Rivadavia, Rovi

Pulverizing Death from the backwoods of Pennsylvania.

“Once in a black moon a band of truly terrible people emerge with no regard for societal norms or common decency. An ingrained shitty attitude makes life generally miserable, and yet provides some of the most raging, sinister and unhinged underground metal this side of the styx. Philly’s Daeva (da-ay-vuh) harness their shitty guy mentality, sharpened over many years and many beers to an acidic burn, and pour it into their debut MLP ‘Pulsing Dark Absorptions’, a snarling beast of blackthrash discord.

While reference points won’t be hard to identify for the worst among you, few bands manage to sound as energized and dexterous as Daeva does while swinging the axe of execution on first wave black metal, dissonant thrash and evil rock n roll. With a vocalist that goes from venomous rasp to mentally deranged to perfect aggressor inside the same song, Daeva slashes, bashes and gnashes through four original compositions with one simple message to convey: FUCK OFF. Finally, a poser corpsing Deathcrush cover closes the B side with a rusty saw blade to yer throat. So wipe that smirk off yer face, set the player to 45 and absorb Daeva’s pulsing darkness.” – 20 Buck Spin