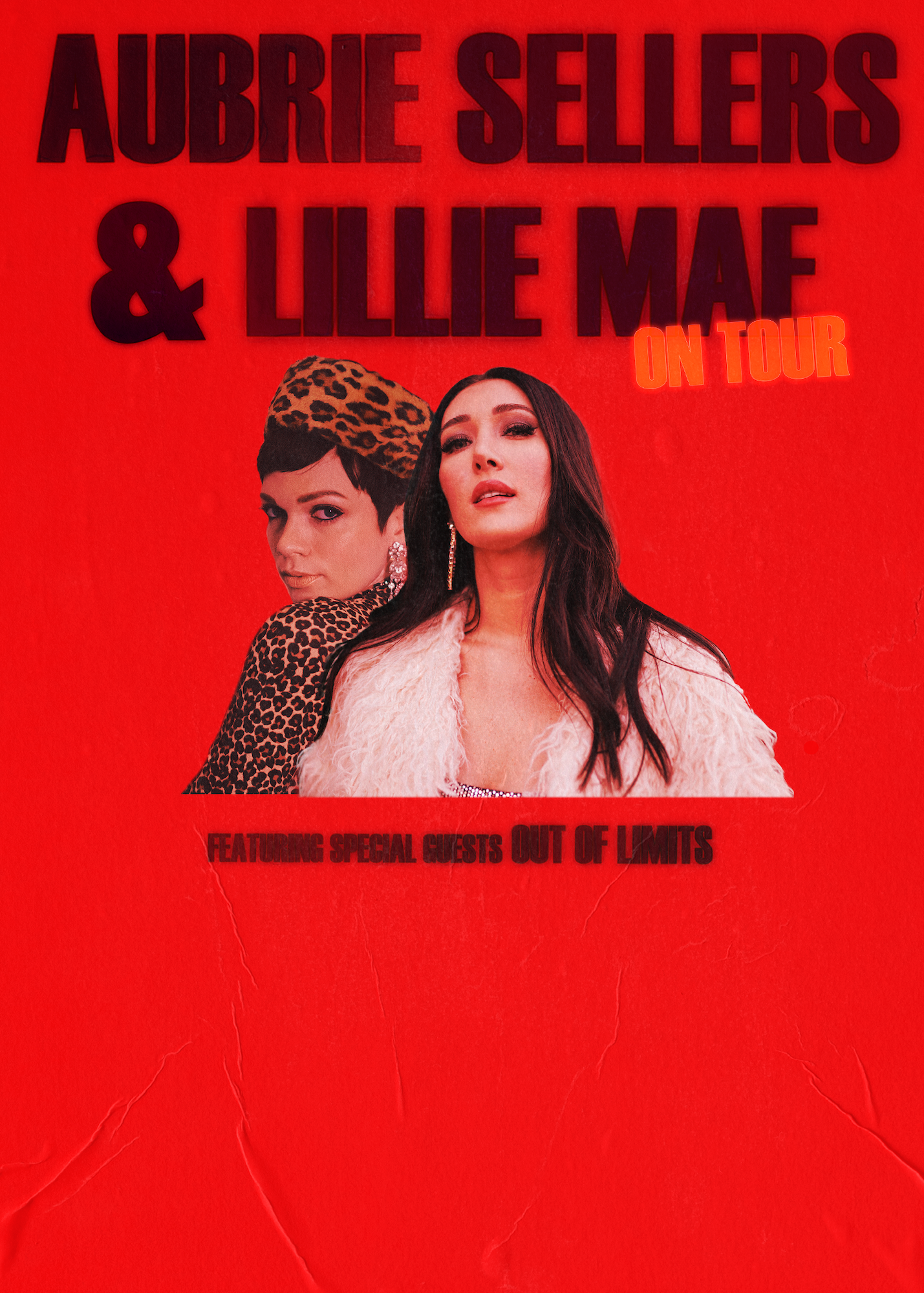 Genre defying artists Aubrie Sellers and Lillie Mae join forces this Spring for one of the year’s most anticipated tours, delivering spitfire performances of songs from both of their critically acclaimed catalogs.

With many commonalities, including being raised in music families, around high caliber musicians, and literally growing up on the road (Lillie in an RV with her family and Aubrie on a tour bus), these women also share the respect of many of their heroes, including Ralph Stanley, Steve Earle, Buddy Miller, Chris Stapleton, Miranda Lambert, Marty Stuart, Iain Archer, Brendan Benson, Jack White, Robert Plant and Dave Cobb, to name a few. Each has also created her own brand of on-the-fringe, “space rock country,” receiving praise from critics across genres.

“I’m beyond excited to embark on this tour with Lillie Mae. Her musicianship, records, and independent spirit inspire me immensely as an artist. To come together and create a musical experience like this has been a dream of both of ours for a long time. We are so lucky to have musicians of this caliber joining us not only in our own bands, but coming together to create a remarkable opening set of their own.” – Aubrie Sellers

“When Aubrie asked me if I wanted to do this tour with her, I got so excited I could barely wait! I couldn’t believe it. I am such a huge fan of her songwriting, last record and new music.. and her incredible voice!  I listen to her all the time, and I’m so honored to join her and her band for this tour, It’s going to be one for the books.. I’m so thrilled to be part of such a cool tour.” – Lillie Mae

“I feel like I’m film in a digital world,” says singer-songwriter Aubrie Sellers. “There are so many slick, clean-sounding records that are designed for quick consumption, but that’s not me. I make dirty, grungy-sounding records, and the emotions spill all over the place. They’re messy at times, but I find beauty in that.”

For anybody who’s ever felt as if they didn’t quite fit in, Sellers’ masterful second album, Far From Home, the follow-up to her sensational debut, New City Blues, is essential listening. Sonically, it’s a sweeping, epic vision made manifest in crushing, amp-busting guitar rock – Sellers once dubbed this sound “garage country” – and delicate yet shattering widescreen ballads that form compelling frameworks for her angelic voice to take flight. One might assume that such fulsome musical expressions could only come from a grand extrovert, but Sellers reveals the deep-seated anxieties that lie beneath the surface – and how writing the album proved cathartic.

Making music came naturally to Sellers, who carries a first-class pedigree in that area. As the daughter of Grammy-winning singer Lee Ann Womack and songwriter-solo artist Jason Sellers, she remembers being surrounded by music. “It’s just what we did, so I didn’t even think about it,” she recalls. But the sounds that Sellers gravitated towards differed from her parents (“I was as much into Led Zeppelin, classic rock and punk as I was Patty Loveless and bluegrass”), and by the time she took up the guitar at age 13, she knew that she needed to explore her own path. “My voice isn’t dissimilar to my mother’s, so I think people expected me to follow in her footsteps. I think I surprised a lot of people when I didn’t.”

Reaching adulthood, Sellers was ready to try her hand at recording, and she found a nurturing partner in producer Frank Liddell – now her step-father – who has helmed records for Miranda Lambert, Jack Ingram, Chris Knight, and Brandi Carlile, among others. For Sellers, the decision to work with Liddell on her first album was a no-brainer that had nothing to do with family ties and everything to do with creativity. “All I had to do was listen to the records that Frank produces,” she explains. “He doesn’t impose his own sound on an artist; he lets everybody sound like themselves. That was really important to me.”

Lillie Mae Rische is an American singer, songwriter, and multi-instrumentalist known to bluegrass and country fans as a member of all-sibling outfits the Risches and Jypsi. Rock fans discovered her fiddle and mandolin playing in Jack White‘s live band. They encountered her instantly recognizable singing voice on “Temporary Ground” from his 2014 Lazaretto album, as well as her debut solo single “Nobody’s”/”Same Eyes,” issued in Third Man Records‘ Blue Series the same year.

Lillie Mae has been singing and playing on stages across the U.S. since she was, quite literally, a child. Though born in Illinois, she was raised almost from the very beginning as an itinerant singer and musician: Her father, Forrest Carter Rische, was a traveling songman who taught all five of his children to play and sing; he eventually drafted them all into the Forrest Carter Family Band. They traveled the American Highway in their motor home, busking from Branson, Missouri to the Texas Rio Grande Valley to Nashville, parking in campgrounds and trailer parks.

Though the family spent most of their time among other well-traveled musicians, the Risches led a sheltered life. Her parents were intensely religious, setting firm boundaries against anything deemed too worldly. With limited access to much outside their musical universe, Lillie Mae and her siblings were a tight-knit family unit, which laid the foundations for their own musical approach a bit later.

In 2000, the Rische family was invited by Cowboy Jack Clement to visit Nashville for an audition. He discerned the potential in the siblings in general and the pre-teen Lillie Mae in particular, whom he declared a major voice when she was just nine. In an interview, Lillie Mae stated that “Cowboy was closer to me than any grandparent I ever had. His influence on me is still strong. He always pushed me to play different instruments; he saw how I would pick up everything in the studio. He was a good friend to me and we remained close until he passed away.”

Lillie Mae, brother Frank Carter Rische, and sisters Scarlett, Amber-Dawn, and McKenna Grace eventually formed their own band, the Risches. The group’s live sets at the Lower Broadway honky tonk Layla’s Bluegrass Inn made them a must-see local attraction. In the press and on the street they were acclaimed for their adept musicianship and an uncommon, original bluegrass/country/pop fusion music. Changing their name to Jypsi, the group signed to a major-label and in 2008, released their self-titled debut album. They scored a Top 40 country hit with the single “I Don’t Love You Like That,” penned by Liz Rose and Stephanie Chapman, but fickle country radio programmers weren’t ready for Jypsi‘s iconoclastic Americana. Lillie Mae kept writing songs that articulated the unique worldview that emerged from her hard-won life experiences.

She met White in 2012 and joined his all-female live and studio band the Peacocks as fiddle and mandolin player. The pair — who are both the youngest children of large families and instrumental polymaths — had much in common and became fast friends. But it went further in that White respected Lillie Mae as a truly original songwriter.

He produced her 2014 Third Man single. Given the musical chemistry shared during that experience, the pair commenced work on an album in 2016. They began with three songs to see if it would hold, and the material kept on coming. Recording at Third Man Studio in Nashville, White got engineer Joshua V. Smith to helm the board. Mae — who wrote all 11 songs on the album — roped in brother Frank on guitars and sister Scarlett on mandolin. Brian Zonn and drummer Tanner Jacobson — longtime family collaborators — anchored the rhythm section. The recording sessions also featured a slew of guests: keyboardist Dean Fertita (the Dead Weather), banjoist Ian Craft (the Howlin’ Brothers), and pianist Cory Younts (Old Crow Medicine Show), with harmony vocals from McKenna Grace Rische, and singer/songwriter Carey Kotsonis.

Two pre-release singles, “Over the Hill and Through the Woods” and “Wash Me Clean,” were released during the winter of 2017, with the full-length, Forever and Then Some, appearing in the spring. That same year Mae also appeared in the PBS documentary The American Epic Sessions.